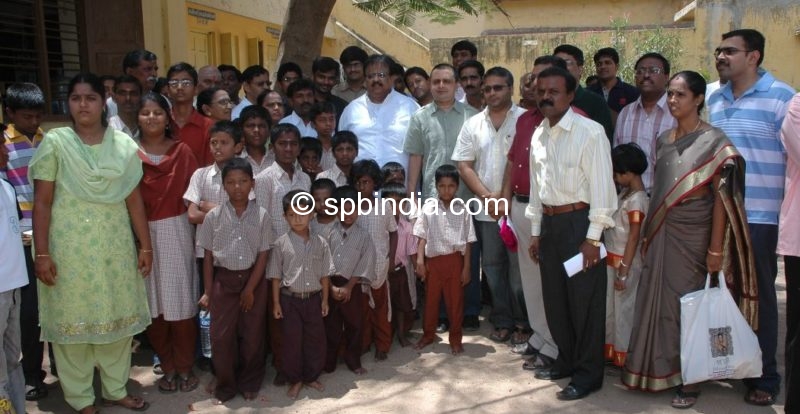 The event took place as planned on 7th June 2009 at Poonamalle, Chennai.

By 10.00am, a small crowd had gathered at the venue eagerly awaiting the arrival of the Legend. There were around 25 fans, some with their family members and others belonged to the near & dears of the Beneficiaries

Mr.Vanarasan detailed about the history of the Centre, how it was formed and the great difficulties he and his wife had undergone to raise the orphaned children and bring them up successfully. He was all praise and thanks to his friends and his father’s friends for assisting him from time to time through monetary contributions and physical service without which his efforts would not have borne fruit.The program started with a devotional sung by the children of the Gandhiji Rehabilitation Centre. Mr.Vanarasan, the founder of the Center welcomed SPB with many admiring words and our SPB was very much humbled by the rain of words showered on him. He constantly tried to stop Mr.Vanarasan from proceeding with this but he was in full flow and we were fortunate to hear continuous phrases of praise about our beloved SPB.Our Guruji stepped into the venue at 10.30am with his divine presence and acknowledged the wishes of one and all.

One note-worthy point is that Mr.&Mrs.Vanarasan treat all the other children as their own (they have 3 children of their own) and it was heart-warming to see all of them together at the event. This point was also observed and commended by our Guruji during his speech.

Some well-wishers of Mr.Vanarasan also spoke about the Centre and about our SPB, his greatness and humility.

One of their wishes is having their own & bigger premises to house the children. Currently, the children are living in a cramped and rented house and rainy seasons makes life unbearable for them. It was also understood that a few children were suffering from some major illness and our SPB was requested to help them in their medical treatment. Our Legend assured that the Foundation would surely look into the possibility of assisting them.

When our SPB was finally called upon to address the gathering, he did so with this trademark humility and down-to-earth approach. He once again made it clear that what he and the Foundation were doing was nowhere near to what people like Vanarasan and his friends were doing. He said that they were dedicating all the hours of their life for the benefit of others and they are the ones who are truly great.

He was also pleased to see that the children were well behaved and this reflected the way that they were being brought up, the discipline and the culture. He was in awe of a boy (a LKG student) who could read out 70 verses of Thirukkural at a stretch (the boy had recognized for this effort in an event chaired by the President of India).

SPB was presented with some sketches by the Children which depicted music through pictures of musical instruments. Some of the children had represented SPB in various forms in their sketches and it was cute seeing him feeling happy about it. He also suggested to us that these sketches be put up in our website.

Finally, on behalf of the SPB Fans Charitable Foundation, he handed over cheques of donation to three beneficiaries. A total donation of around Rs.75,000 was made at the event, some portions as note-books for the children and a major portion as monies in the form of cheques.

The event ended with a photo session with the beneficiaries and some of the fans.

The event ended well even though there was some disappointment in the hearts of the fans that our SPB did not sing some songs. The situation and the ambience did not permit it and it had to be conducted in a formal way. Anyway we had the major satisfaction of having participated in such an event and serving the society in a way.

The SPB Fans Charitable Foundation extends its thanks to ALL who have contributed to the event through their presence, donations and well wishes. 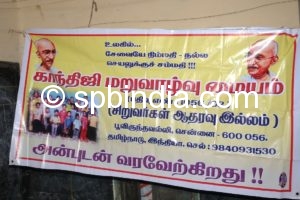 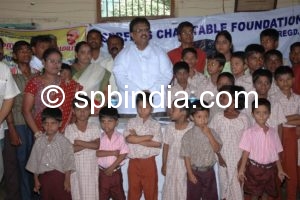 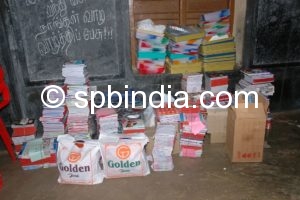