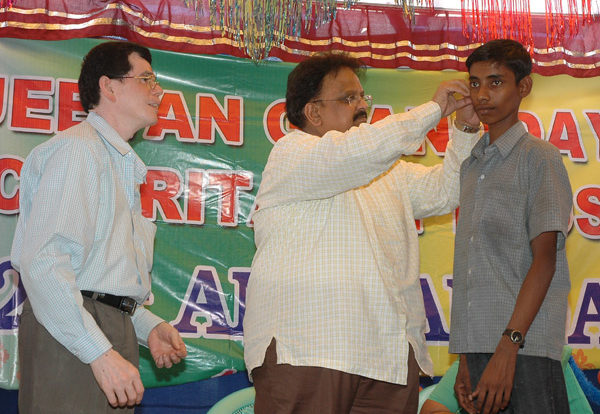 28th Dec 2008 would remain in the annals of the SPB FANS CHARITABLE FOUNDATION as a golden lettered day, for, on this day, a charity event was organized at a School for Deaf & Dumb at Chengalpet and Rs.1,00,000 was donated in the form of class room furniture, utensils and other utilities/amenities. This is the highest donation by the Foundation in a single event till date.

What do you get, when two human beings, great in their own rights, come together – ONE, who has dedicated his entire life to the welfare of the Deaf & Dumb Children and the OTHER, Humanity personified, in spite of being one of the few best film singers in a commercial stream, where popularity, fame and money find an easy way to one’s head filling it up with unwanted ego?

“You get the ultimate feeling that great human beings exist in spite of extremities, un-spoilt by worldly and materialistic influences”

That is what had happened at the Jeevan Gnanodhaya School at Chengalpet for the Deaf & Dumb on 28.12.2008.

The First ONE was Mr.Devarajan, the Founder of the School & the other was none other than our dear SPB with all humility and humanness endowed in him.

It was indeed a sight to savour and take in the stream of humanness emanating from their hearts and their actions.

Which Singer can touch the heart of a dumb & deaf child if not our beloved SPB? His voice had not only captivated the fortunate ones like us, but has also touched the hearts of the less fortunate deaf & dumb ones. This was evident in the eyes of the children there, which were filled with awe and admiration, on seeing the legendary figure in flesh & blood, standing and admiring their efforts & growth and lauding them abundantly and with no restraints whatsoever. Maybe they saw in HIM a loving & passionate grandfather.

What more do you expect from a great human being, who landed at the Chennai Airport from Bangalore on the morning of 28th Dec 2008 and drove straight to the School in Chengalpet situated 45 kms away, rather than take the much preferred route of normal human beings to home. That shows what an exceptional character he is and in turn his commitment to the society that he lives in.

Well, one can dwell upon his attributes at great lengths, without getting saturated, so it would only be right to speak on the Charity event itself which was organized coincidentally on the 20th Annual day of the School.

SPB had been magnanimous and generous enough in reserving this date for this event, well in advance, wherein a sizeable donation was planned by the SPB FANS CHARITABLE FOUNDATION. This was the 4th  charity event organized the Foundation this year, the earlier ones being for Coimbatore Seva Nilayam in Feb’08, Kalaiselvi Welfare Society at Chennai in Jun’08 (both presided over by the sweet SPB) and Freedom Foundation at Chennai in Oct’08.

The Donor Institution this time was identified by Mr.Seshadri, one of the highly active members of the SPB Fans Charitable Foundation.

A team of Foundation Members headed by Mr.Giridhar Raja, the Managing Trustee arrived at the School at around 10.00am on the morning of 28th Dec 2008.

SPB arrived at 10.45am to the eager expectation of all those present at the venue. A grand stage had been set-up for the event which also coincided with the 20th Annual Day of the Institution.

Mr.Devarajan received the Guest of Honour warmly in his Cabin and went to great lengths in explaining about the activities of the School and introducing the great human force within the Institution which was selflessly keeping the wheels of the Institution rolling. The School was founded in the year 1989 and started off with three children.

SPB & team were then taken on a tour of the School which caters to around 150 deaf & dumb students. They were first taken to a Class where Mr.Devarajan & his staff explained through a demonstration on how the children were taught the language in the script form through interpretation of the lip movement. It was understood that method of teaching through signs had been introduced recently so that the barriers of language were overcome and a unified communication medium could exist across the section of these children.

The team was then shown a section where technical skills were imparted to the children in a combination of Tamil / English scripts. The children are being taught mechanical engineering subjects through learning of engineering drawings and workshop practices. It is understood that this Institution is the only one which is offering technical training to deaf & dumb student in this region. Speech therapy methodologies using equipments were also demonstrated.

The school has classes right from Std I to XI and vocational training classes like any other school for normal children. The visiting team was exposed to the teaching methods employed for the different Standards of Classes. SPB was all ears & eyes seeing the demo classes with utmost focus which showed that it was not a mere formality for him. He enjoyed & lauded the smartness of some of the children when they answered correctly and also cutely appreciated and understood the plight of some who struggled to get the answers right.

The School has a Science Lab equipped with physical balances, microscopes and telescopes. Tailoring classes are also being conducted for the girl students. The team also witnessed a tenth standard boy solving equations in the presence of SPB and receiving his applause ultimately for coming out with the right solution for the equations given.

Having completed the enlightening tour, the gathering which comprised of the Well wishers of the School, the parents of the children and the Foundation members, were treated royally to a stream of cultural events that seem to have been well planned for the occasion.

One could not but feel delighted listening to the cute recitation of Thirukkural by a student of the nursery classes, followed by an oratory on the pros & cons of employing science in life. One student came out with a recitation of her life ambitions. The cultural events included dancing to some popular Tamil songs and covered a wide range of dance types from traditional to modern. Two of his popular numbers formed a backdrop to dance sequences performed by the children. .A Shakespeare’s play “The Merchant of Venice” was refreshed before our eyes, which was nostalgic – the children performing admirably. One could savour the Tamil spoken by the Children in a Tamil play. The event had all the ingredients and went out to show the great effort of the Teaching staff and the children in making this a grand and successful event.

The ultimate highlight was that SPB was focused on the events right through, applauding the children in their performances. His parental care came to the fore when he called upon one of the organizers to set right the carpet on the stage which had got dislocated from its position and could have proved fatal to the dancing children on the stage.

The grand event culminated with honours to the guests who had graced the event. SPB was called upon to distribute mementos to all the 150 children and he did it untiringly with a smile. He signed off with a short and sweet speech wherein he lauded the efforts of Mr.Devarajan who selflessly had devoted his life to the cause of deaf & dumb children based on his own experience of being presented with a deaf & dumb son (it is understood that the Institution has been named after his son Jeevan). He also gave due credit to the members of the SPB Fans Charitable Foundation who were behind the grand success of this event. He went on to honour them further by referring to them as his “BROTHERS” and not just fans. On insistence from Mr.Devarajan, he rightly honoured Mr.Seshadri & Mr.Ashok of the Foundation by presenting a shawl with an icing that it was the Foundation that rightly deserved it. On behalf of the SPB Fans Charitable Foundation, he also handed over the donation to Mr.Devarajan.

It was indeed a memorable day for the Fans and Members of the SPB Fans charitable Foundation.

The SPB Fans Charitable Foundation expresses its thanks & gratitude to all the donors and well wishers who had made this event a successful one and the Foundation feels more confident in moving ahead and conducting many such charity events with more support from the members and the public.

Generous contributions are invited from the general public and institutions in order to carry more such events for the society.

No amount is big or small when we wish to give something back to the society.

All donations are subject to exemption under 80G of Income Tax Act. 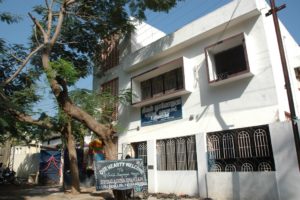